Lent Madness is a yearly event that takes place entirely online. However, if you want to engage with others at St. Martin’s who are in on the fun, please contact Kerry Angle at kkangle@prodigy.net. You can also refer to the 2020 Bracket, which will be updated daily, and which are hanging in the hall by the church office or on Sundays at coffee hour in the small parish hall. And now…read on!
Lent Madness 2020
The Saintly Smackdown Returns!
“What are you doing for Lent?” In the run-up to the church’s holy season of repentance and renewal, this question echoes in parish halls and dining rooms, pews and study halls. 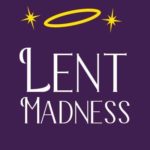 One exciting and life-giving answer to the proverbial question is “Lent Madness!” That’s because, for the eleventh straight year, people of faith the world over are filling out brackets and gearing up for the 2020 “saintly smackdown.”
With its unique blend of competition, learning, and humor, Lent Madness allows participants to be inspired by the ways in which God has worked through the lives of saintly souls across generations and cultures. Throughout Lent, thirty-two saints will battle to win the coveted Golden Halo. Based loosely on the NCAA basketball tournament of a similar name, this online devotion pits saints against one another in a bracket as voters choose their favorites throughout this penitential season.
Here’s how to participate: on the weekdays of Lent, information is posted at www.lentmadness.org about two different saints. Each pairing remains open for 24 hours as participants read about and then vote to determine which saint moves on to the next round. Sixteen saints make it to the Round of the Saintly Sixteen; eight advance to the Round of the Elate Eight; four make it to the Faithful Four; two to the Championship; and the winner is awarded the Golden Halo.
The first round consists of basic biographical information about each of the 32 saints. Things get a bit more interesting in the subsequent rounds as we offer quotes and quirks, explore legends, and even move into the area of saintly kitsch.
This year, Lent Madness features an intriguing slate of saints ancient and modern, Biblical and ecclesiastical. This year’s saints include heavyweights such as Patrick, Harriet Tubman, Clare of Assisi, Hildegaard of Bingen, Joseph, and Jude, along with many lesser known yet equally inspiring people of faith. The competition kicks off on “Ash Thursday,” February 27, with an epic battle between Thomas More and St. James the Less.
The full bracket is online at the Lent Madness website www.lentmadness.org and, while not necessary to participate, you can order The Saintly Scorecard: The Definitive Guide to Lent Madness 2020 at www.forwardmovement.org. This companion guide includes biographies of all 32 saints, a full-color bracket, and information about how to fully participate.
Lent Madness began in 2010 as the brainchild of the Rev. Tim Schenck, an Episcopal priest and rector of St. John’s Church in Hingham, Massachusetts. In seeking a fun, engaging way for people to learn about the men and women who make up the church’s calendar of saints, Schenck devised this devotion. Combining his love of sports with his passion for the lives of the saints, Lent Madness was born.
Starting in 2012, Schenck partnered with Forward Movement (the same folks that publish Forward Day by Day) executive director Scott Gunn, to bring Lent Madness to the masses. Schenck and Gunn form the self-appointed Supreme Executive Committee, a more-or-less benevolent dictatorship that runs the entire operation.
Why focus on saints during Lent? Like us, their vision may not have been perfect — and they had their share of blind spots. But what binds them together, is a strong faith in Jesus Christ and a willingness to serve him amid the circumstances of their own day. They saw the face of God with perfect clarity and shared God’s love for the world in their own ways. If we allow them into our lives, the saints can serve as a deep source of spiritual inspiration.
Twelve “celebrity bloggers” from across the country have been tapped to write for the project: the Rev. Amber Belldene of San Francisco, CA; the Rev. Laurie Brock of Lexington, KY; Anna Fitch Courie of Columbia, SC; Dr. David Creech of Moorhead, MN; the Rev. Megan Castellan of Ithaca, NY; Miguel Escobar of Brooklyn, NY; Neva Rae Fox of Somerville, NJ; the Rev. David Hansen of Woodlands, TX; Carol Howard Merrit of Cincinnati, OH; Emily McFarlan Miller of Chicago, IL; Sandra Montes of New York, NY; and the Rev. David Sibley of Walla Walla, WA. Information about each of the celebrity bloggers and the rest of the team is available on the Lent Madness website.
This year’s Golden Halo winner will join illustrious company. Previous winners were George Herbert, 17th century English poet, 2010; C. S. Lewis, 20th century British writer and theologian, 2011; Mary Magdalene, disciple of Jesus, 2012; Frances Perkins, 20th century American public servant, 2013; Charles Wesley, 18th century English preacher and hymn writer, 2014; Francis of Assisi, 13th century monastic and advocate for the poor, 2015; Dietrich Bonhoeffer, 20th century German theologian and activist who was killed by the Nazis, 2016; Florence Nightingale, 19th century nurse and social reformer, 2017; Anna Alexander, the first African-American Deaconess in the Episcopal Church, 2018; and Martha of Bethany, the Biblical sister of Mary, 2019.
If you’re looking for a Lenten discipline that is fun, educational, occasionally goofy, and always joyful, join the Lent Madness journey. Lent needn’t be all doom and gloom. After all, what could be more joyful than a season specifically set aside to get closer to Jesus Christ?