This past Sunday, March 17, the Cub Scout meeting commenced at 3 pm with the Raingutter Regatta & a ceremony afterwards to recognize Cub Scouts on their advancement within the pack. The Raingutter Regatta is a racing event, the sailboat equivalent of the Pinewood Derby. The actual race consists of blowing one’s sailboat with a straw, and whichever boats makes it to the end first, wins. Process of elimination determines the winner. Boy Scouts and Den Leaders Alexandra Johnson and Susan Sendar helped with the construction and set up of the sailboats while Cubmaster Liza Goodner and Chartered Organization Representative Christopher DeClerk led Boy Scouts Jordan DeClerk and Matthew Goodner in assisting the set up of the “Raingutter,” an inflatable water container. Cub Scouts Elliot Goodner and Ethan Sendar competed in the first race, then Levi Johnson with the next. The process of elimination determined the winner. A former Boy Scout himself, Father Scot McComas competed in the final round!
After the excitement of the competition was over, a ceremony was held honoring Elliot Goodner, who just completed his Bobcat Badge requirement! This badge was sewn on to his uniform…after doing a good deed. Elliot decided to help his family by taking the bags out of the car after a vacation.
The Cub Scouts then joined the Boy Scouts inside for the Scouts “Court of Honor” ceremony. The Cub Scouts are learning to carry the Cub Scout flag that was recently donated and the pack is so thrilled! Several announcements were made and merit badges were received by dozens of scouts! Jordan DeClerk received his Religious Emblem Knot, which represents that “A Scout is Reverent. He is reverent toward God. He is faithful in his religious duties and respects the convictions of others in matters of custom and religion.”
The Cub Scouts are continuing to grow & learn in their pack, with support from our Boy Scouts, and with special thanks to members of St. Martin’s for buying discount cards. The boys have worked hard selling these cards after church to raise funds to support the pack. Our sincere thanks to the Father Scot and the congregation of St. Martin-in-the-Fields for support and prayers for the BSA Scout Troop and Cub Scout Pack that do so much to help our church and surrounding communities! Stay tuned for a report of our Cub Scouts’ first camp out coming up on March 30, and many other activities to come!
For more information about the Boy Scouts and Cub Scouts, or to get your 2019 Camp Card (for awesome discounts!) please contact Christopher DeClerk at chrisdec@sbcglobal.net.
See photos on Flickr & Facebook! 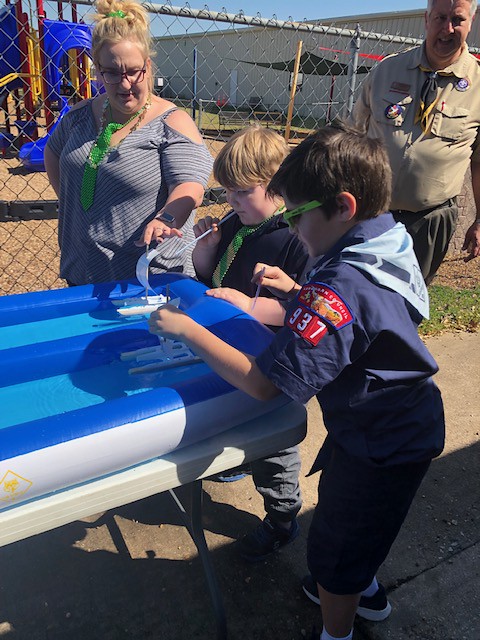